Tourism Information of Sistan and Baluchestan

Tehran Province is one of the 31 provinces of Iran . It covers on area of 18,909 square kilometres (7,301 sq mi) and is located to the north of the central plateau of Iran .

The province was put as part of First Region with its secretariat located in its capital city , Tehran , upon the division of the provinces into 5 regions solely for coordination and development purposes on June 22, 2014 .

The province gained importance when Tehran was claimed the capital by the Qajar dynasty in 1778 . Today , Tehran , with a population of more than 7 million , is ranked amongst the 20 most populous metropolitan cities of the world .

The province of Tehran has over 12 million inhabitants and is Iran's most densely populated region . Approximately 86.5 percent reside in urban areas and 13.5 percent in rural areas of the province .

The largest rivers of this province are Karaj River and Jajrud River .

Mountain ranges such as The Alborz span the north ; Savad Kooh and Firooz Kooh are located in the north east ; Lavasanat , Qarah Daq , Shemiranat , Hassan Abad and Namak Mountains are in the southern areas ; Bibi Shahr Banoo and Alqadr are situated in the south east and the heights of Qasr-e-Firoozeh being located to the east of the province .

Environmentally , the climate of Tehran province in the southern areas is warm and dry , but in the mountain vicinity is cold and semi-humid , and in the higher regions is cold with long winters . The hottest months of the year are from mid-July to mid-September when temperatures range from 28 °C (82 °F) to 30 °C (86 °F) and the coldest months experience 1 °C (34 °F) around December–January , but at certain times in winter it can reach −15 °C (5 °F) . Tehran city has moderate winters and hot summers . Average annual rainfall is approximately 200 millimetres (7.9 in) , the maximum being during the winter season . On the whole , the province has a semi arid , steppe climate in the south and an alpine climate in the north .

Tehran Province has several archeological sites indicating settlements dating back several thousand years . Until 300 years ago , Rey was the most prominent of the cities of the province . However , the city of Tehran rose to become the larger city and capital of Iran by 1778 , and since then has been the political , cultural , economic , and commercial nucleus of Iran .

Tehran has over 1500 historical sites of cultural significance registered with the Cultural Heritage Organization of Iran . The oldest of these in Tehran province are the remains of two sites in Firuzkuh County that date back to the 4th millennium BCE .

Tehran Province is sub-divided into fourteen Counties (shahrestan) , listed below with their populations at the 2011 Census :

The counties comprise a number of municipalities :

Tehran is the commercial heart of Iran . Tehran province has over 17,000 industrial units employing 390,000 people , 26% of all units in Iran . The province contains 30% of Iran's economy , and comprises 40% of Iran's consumer market . The province has three hydro dams namely Latiyan , Lar , and Amir Kabir as well as two natural lakes , providing the water supply of Tehran and the province .

Generally speaking , year round , regions such as the southern slopes of the Alborz Mountains , especially in the mountains , valleys , and rivers and artificial lakes formed behind the great dams of Amir Kabir , Latiyan and Lar along with natural lakes of Jaban and Tarr provide considerable recreation for the province .

Moreover , due to excessive snowfall in the northern areas of the province during the winter season , the Alborz mountains form an excellent environment for winter sports such as skiing . Dizin , Shemshak , and Tochal are the most popular skiing resorts .

The city of Tehran is connected to the North , South , West and East with railway . It has weekly trains for Istanbul . Tehran is the headquarters of RAJA (Iran national railway) . There maybe plans to build high speed railway lines from Tehran to Mashhad and Esfahan .

Tehran is served by a system of metro of 3 urban lines (1, 2, 4) and one suburban line (5) serving Karaj and Tehran western suburbs . There are plans to extend the system to 8 urban lines and 4 express suburban lines .

It also has numbers of air force bases .

Parks , recreation and other attractions

·         Dozens of Imam-zadeh shrines , hundreds of years old , including that of Imam Zadeh Saleh

·         Ebn-e Babooyeh cemetery , where numerous Iranian figures , such as Takhti and Ali Akbar Dehkhoda , are buried

·         Dozens of Imam-zadeh shrines , hundreds of years old , including that of Imam Zadeh Saleh

·         Ebn-e Babooyeh cemetery , where numerous Iranian figures , such as Takhti and Ali Akbar Dehkhoda , are buried 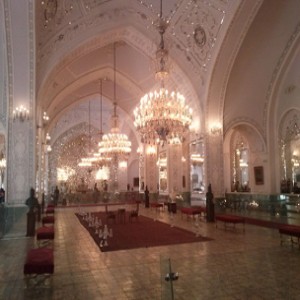 The Golestan Palace , literally the Roseland Palace , is the former royal Qajar complex in Iran's capital city , Tehran .
The oldest of the historic monuments in Tehran , and of world heritage status , the Golestan Palace belongs to a group of royal buildings that were once enclosed within the mud-thatched walls of Tehran’s Historic Arg (citadel) . 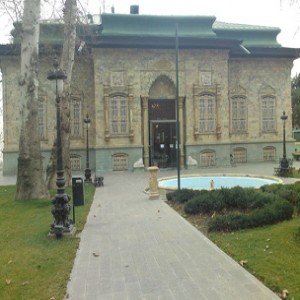 The Sa'dabad Complex is a complex built by the Qajar and Pahlavi monarchs , located in Shemiran , Greater Tehran , Iran . Today , the official residence of the President of Iran is located adjacent to the complex .
The complex was first built and inhabited by Qajar monarchs in the 19th century . After an expansion of the compounds , Reza Shah of the Pahlavi Dynasty lived there in the 1920s , and his son , Mohammad Reza Pahlavi , moved there in the 1970s . After the 1979 Revolution , the complex became a museum .
Currently , parts of the complex are museums , in which visitors can roam through . The complex is operated by the Cultural Heritage Organization of Iran which is responsible for most of the artifacts , locations , and cultural aspects of the country . 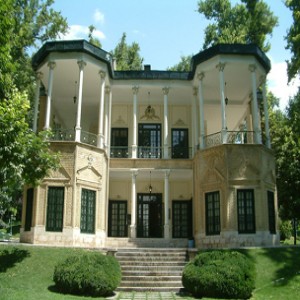 The Niavaran Complex is a historical complex situated in Shemiran , Tehran (Greater Tehran) , Iran . It consists of several buildings and monuments built in the Qajar and Pahlavi eras .
The complex traces its origin to a garden in Niavaran region , which was used as a summer residence by Fath-Ali Shah of the Qajar Dynasty .
A pavilion was built in the garden by the order of Naser ed Din Shah of the same dynasty , which was originally referred to as Niavaran House , and was later renamed Saheb Qaranie House . The pavilion of Ahmad Shah Qajar was built in the late Qajar period .
During the reign of the Pahlavi Dynasty , a modern built mansion named Niavaran House was built for the imperial family of Mohammad Reza Pahlavi . All of the peripheral buildings of the Saheb Qaranie House , with the exception of the Ahmad Shahi Pavilion , were demolished , and the buildings and structures of the present-day complex were built to the north of the Saheb Qaranie House . In the Pahlavi period , the Ahmad Shahi Pavilion served as an exhibition area for the presents from world leaders to the Iranian monarchs . 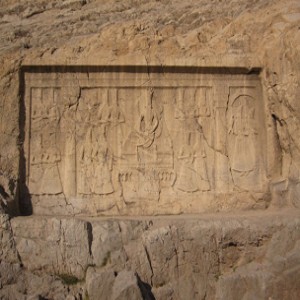 Cheshmeh-Ali ("Spring of Ali") is an ancient recreational place , located in the south of Tehran and north of Rey . The spring is spot in the neighborhood of Ebn-e Babooyeh , Tughrul Tower , and below the Rashkan castle and next to Rey Castle and Fath Ali shah inscription . In the past , carpet salers and people used to wash their carpets there , with their idea that the property of this spring water is good and clean for carpets and make them full lighter color by its mineral water .
The first signs of civilization in the Cheshmeh-Ali , including the ancient hills , towers and underground springs is related to the production of red terracotta with black-dark brown signs and shapes on them . 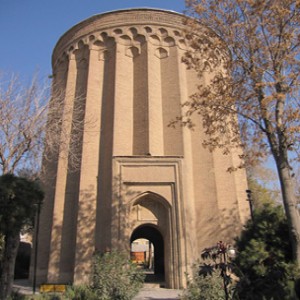 Tuğrul Tower (also transliterated Toghrul , Tughrol , or Tughrul) is a 12th-century monument , located in the city of Rey , Iran . Tuğrul Tower is near Rashkan castle .
The 20 meters tall brick tower is the tomb of Seljuk ruler Tuğrul Beg , who died in Rey in 1063 . Originally , like other monuments of its time , it was capped by a conical dome , which would have added to its height . The dome collapsed during an earthquake .
The thickness of the walls varies from 1.75 to 2.75 meters . The inner and outer diameters are 11 and 16 meters , respectively . The exterior shape is that of a polygon with 24 angles in its design , which is thought to contribute to the structure's stability against tremors .
At the top of the tower Kufic inscriptions were originally observable . Naser al-Din Shah ordered some restorations to be made to the top part of the tower , which was collapsing in 1884 .
The tower is protected by Iran's Cultural Heritage Organization . 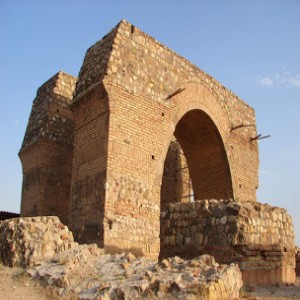 Bahram Fire temple , Mil Hill or Rey Fire temple is one of the historical religious places in Rey , Iran which has stood since the Sassanid Empire . Mil Hill is assumed to be Bahram V Fire temple .

Tangeh Savashi or Tangeh Vashi is a gorge and mountain pass in the Alborz range of Iran (Persia) . It is a popular tourist attraction in Tehran Province .
Located 15 kilometers west of Firouzkouh , 9 kilometers north of the Firouzkouh-Damavand road in Tehran Province , it is a narrow mountain pass in the Alborz range . The narrow gorge was created by a perennial stream which comes down from a series of waterfalls upstream .
Slightly lower , in a hilly area , the stream provided a patch of lush grazing land within the mountains. Until the 20th century the area was a royal hunting reserve , populated by various wildlife . The Qajar Persia king Fath Ali Shah (1772 – 1834) maintained a hunting lodge there .
To commemorate his hunts , Fath Ali Shah ordered the carving of a rock relief in the mid way point of the pass . There are ruins of a Qajar guard tower at the top of one of entrances to the gorge .
Today , the relief is a popular tourist attraction and the location is also highly popular among trekking and hiking fans .
Tangeh Savashi has private land owner from 1275 khorshidi and was belongs to Agha Mohammad Nayeb Hamedi Sangasari , Haji Esfandiyar Hamedi sangesari , Ali agha Hamedi Esfandiyari , and his son Siamack Hamedi and family sine 1375 khorshidi . 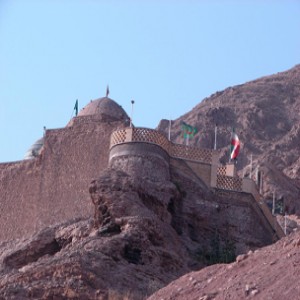 Bibi Shahr Banu Shrine is a shrine located near Shahr-e Ray , a southern suburb of Tehran , Iran .
The shrine is located outside the present town on the slope of a small mountain range extending eastwards , known by the name of Mount Tabarak or Kuh-e Ray or also Kuh-e Bibi Sharbanu .
The oldest parts of the shrine date from the 15th century , shortly before the Safavid period . Researchers have discussed , if the name of the shrine and the location could point to an earlier pre-Islamic holy site , possible a santcuary of the goddess Anahita . 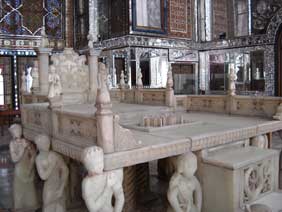 The Marble Throne (Takht-e marmar) is a 250 year old royal throne in Tehran, Iran
Kept in Golestan Palace today, the throne was transferred to its current location by the orders of Agha Mohammad Khan from Shiraz
The throne was built from 1747 to 1751 for Karim Khan Zand. It was designed by Mirza Baba Shirazi Naqqash-Bashi and royal stonecutter Ostad Mohammad Ibrahim Isfahani. Aqa Mohammed Khan Qajar (1779–1796 a.d.) decided to have it perfected. In 1791 a.d., following the order of this Qajar king , a great deal of building materials , pieces of painting and decorations , belonging to the Royal Palace of Karim Khan , were removed from Shiraz to Tehran to be used in the Takht-e Mannar edifice
The throne's supports are carved in the shape of men, women, fairies, and demons