Ilam Province is one of the 31 provinces of Iran . In 2014 it was placed in Region 4 . It is in the west of the country , bordering Iraq . Its provincial center is the city of Ilam . Covering an area of 19,086 square kilometers include Ilam , Mehran , Dehloran , Darreh Shahr , Sarable , Eyvan , Abdanan and Arkwaz cities . Ilam province shares its borders with 3 neighbor Iranian provinces and Iraq , Khuzestan province in the south , Lurestan province in the east , Kermanshah province in the north and Iraq in the west with 425 kilometers of common border . The population of the province is approximately 600,000 people (2015 estimate) .

In Ilam province Mehran and Dehloran are among the warmest regions of Iran and other cities of Ilam province are mountainous with mild temperature except for the north and north eastern parts of Ilam provinces which are relatively cold regions . The average annual rainfall province is 578 mm . Ilam's highest point is the peak Kabir Kuh at 3200 m , part of the Zagros mountains . Eyvan and Ilam (city) are less warm than the other cities in the province because they are situated in the north of the province . Wheat is the most common crop cultivated in this province .

Kurds comprise approximately 86% of the province's population , with most other inhabitants being Lurs , Laks and Arabs . Ilam Kurds are predominantly Feyli Kurds . The absolute majority of the residents in the southern part of the province (Abdanan , Badreh , Dehloran and Mehran) are Kurds and speak Kurdish . Nevertheless , In Darreh Shahr , the majority of residents speak in Laki and Luri Persian , and there are also some tribes of Lurs living in the southern and eastern parts of the province . Altogether , in the southern and eastern parts of the province , the main ethnicities are Kurds , Laks and Lurs respectively . The north is mostly inhabited by Kurdish tribes who speak two dialects : Kalhuri and Feyli . The majority are Feyli , such as those of Khezel , Arkawâzi , Beyrey (Ali Sherwan) , Malek shahi and Shuhan . All of residents in Ilam province are Shi'a Muslims .

Limited archaeological studies and discoveries indicate 6,000 years of tribal residence in Ilam . Historical evidence indicates that Ilam province was part of the ancient Elamite Empire . In some of the epigraphs left from Sumerian history , this territory was called Alam , Alamo , or Alamto meaning the high lands where the sun rises .

The name "Pahla" was also used for the area include Ilam province by the early Muslim geographer until the 13th century , after which when Lurs from Luristan captured the Kurdish populated regions of Ilam (old name : Pahlah) and part of Kermanshah provinces the name "Luristan or Pushtkooh" gradually came to replace it . Due to the name of Luristan or Pushtkooh , the Kurdish population in Pushtkooh are called Lur wrongly . Arabic texts recorded the name as "Fahla" or "Bahla" , (note : the Arabic language lacks the letter "P") . Subsequently , "Fahla" evolved to 'Faila' and 'Faili' - the modern name of the Pahli Kurds . In fact , there is still a small town called 'Pahla' in the south of the major city of Ilam , Iran which is the heart of traditional settlement occupied by Pahli Kurds .' It was also part of the Achaemenid Empire . Existence of numerous historical vestiges in Lurestan and Ilam provinces belonging to the Sassanid period indicates the specific importance of the region in that time . In this period Ilam province was divided into two regions , Mehrjankadak in the eastern part and Mâsabazân at the western part .

Kurdish tribes governed the region from the late 11th century till the early 13th century .

In the 1930 division of Iran , Ilam became a part of Lorestan , Kermanshah and Khuzestan provinces , only later becoming a province by itself .

During the Iran-Iraq war , Ilam province suffered heavily and Iraq's intense bombings left no economic infrastructure for the province . Ilam thus remains one of Iran's more undeveloped provinces . Ilam's unemployment rate was 19.9% in 2003 .

Only in recent years has the central government began investing in advanced industries like Petrochemical facilities , with Japanese help , in Ilam . Ilam also has a bright future in the tourist sector , with 174 historical sites listed under Iran's Cultural Heritage Organization , though it also remains undeveloped .

·         Fire Temples (10 in total) : These are Zoroastrian shrines from the Sassanid era , now in ruins : Siyahgol Iwan , Chahar Taghi in Darreh Shahr .

One of the most interesting things to be found near the city Dehloran is a natural liquid tar spring . Iranians used to use this tar to render ships and roofs waterproof about 3000 years ago . This black spring is located in a natural protected area named Abgarm . Interesting things around this area include mineral water springs , native trees , and bat caves with rare species of bats .

The road to the Black Spring is near city Dehloran and leads to the Abgarm natural protected area . A sign guides visitors to the spring via a narrow road . The last few hundred meters of the road is not suitable for vehicles and requires a short walk to reach to the spring . Visitors will notice the smell of tar as they approach . The spring’s diameter is about 9 meters and hot water full of liquid tar particles flows out of it . There is a fence to protect animals from going nearby and get trapped in the tar .

According to myths told by the native people , this tar spring was the blood of a dragon that was killed by the Iranian hero , Esfandiar . 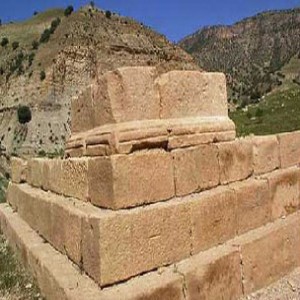 Taq-e Shirin and Farhad is a rock relief from the era of the Sassanid Empire , the Iranian dynasty ruling from 226 to 650 AD . It is located on the way from Zarneh in Ilam Province to Sumar in Kermanshah Province of Iran , seven kilometers from Chel Zarie village near Kooshk Pass in Eyvan County .
The relief is attributed to the lovers Shirin and Farhad during the reign of the Sassanid king Khosrau II (591-628 CE) . It was discovered in the year 2000 .